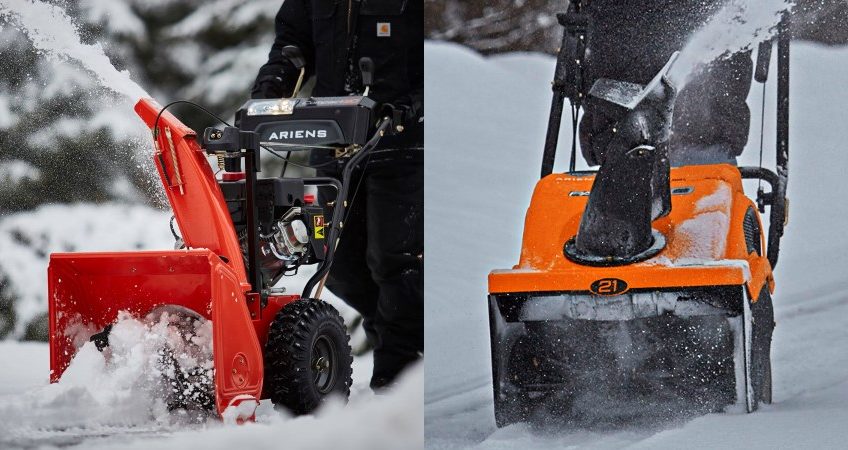 Is there a difference between a snow blower and snow thrower? On the surface, it seems like both terms are really describing the same machine- especially since they are often used interchangeably. But, they are actually quite different.

Though both a snow thrower and a snow blower can be used to clear snow from your driveway, a walkway or a nearby sidewalk, each type of machine is suited to very different circumstances. Which kind of snow removal machine is best for you really depends on your particular needs. We’ll go through the differences below.

What is a Snow Thrower?

A snow thrower refers to snow removal machine that quickly picks up snow in one motion and throws it out of a nozzle. It is referred to as a “single stage” machine because the snow is thrown in a single motion.

Snow throwers are smaller and lighter than snow blowers. While it is generally effective at snow removal, snow throwers do not throw snow as far as a two stage snow blower. Another key difference is that a snow thrower can only handle dry snowfalls between 1 to 1 ½ feet deep.

There are two big benefits to owning a snow thrower as opposed to a snow blower. One is that these machines tend to be relatively inexpensive, when compared to a two-stage snow blower. The second is that some of them are powered by electricity if you’re interested in an electric machine vs gas.

What is a Snow Blower?

A snow blower refers to a two stage snow removal machine. In the first stage, it picks up the snow. In the second stage, the snow is fed to a motor-powered section called an impeller which launches the snow out of a nozzle.

Snow blowers are bigger, more powerful machines that will move snow greater distances than a snow thrower (some models can shoot show up to 50 feet away). Two stage snow blowers are also wider, allowing them clear large areas faster than a snow thrower. Another important point to consider is that snow blowers are better equipped to handle snow that is slushy or icy. They can also deal with deep snowfalls as well as that tall, compacted snowbank the plow driver so nicely left at the end of your driveway.

Unlike snow throwers, snow blowers are self-propelling machines that can be set to a number of speeds- both forward and reverse. This means anyone can use them. Snow blowers are typically powered by gas, but most models have an electric start (which is important in a deep freeze). They also need engine oil that will have to be checked and replaced from time to time.

In terms of price, since snowblowers are a more powerful machine, they are more costly than snow throwers but are able to tackle more, and heavier, snow and may have additional features like hand warmers.

Which Machine is Right for You?

If you do not get heavy snowfall, and you don’t have such large areas to clear, a single stage snow thrower may be a good option. Snow throwers are not built for a lot of snow. But if you are mostly going to be clearing out small, dry snowfalls, then there’s no need for a snow blower.

On the other hand, snow blowers are generally recommended for people are dealing with heavy snowfalls and who have large spaces clear. If you are routinely getting 1 ½  to 2 feet of snowfall (or more), and the snow is often the wet and heavy, then a snowblower is the better option.